Made my annual visit to the Dyfi Valley Bookshop in Machynlleth in case any of the 100-odd novels written by my great aunt Berta have fetched up there in the last 12 months; or (less likely, since he is much sought after by collectors) anything by Bernard Darwin in the golf section.  No luck on either score, but I picked up Eric Newby’s autobiographical A Traveller’s Life (Collins, 1982) and bought it on the strength of a chapter near the end called Wimbledon to Italy by Bicycle.   It is a quite a bizarre tale. 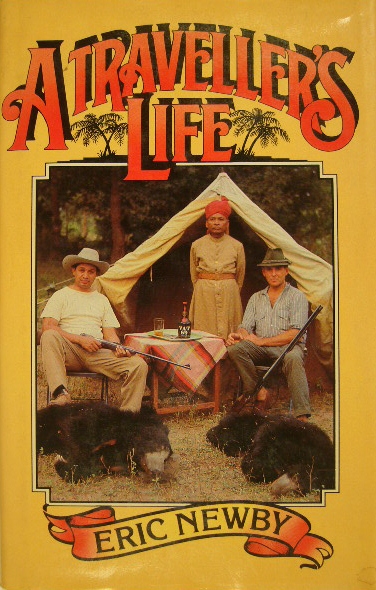 Newby made regular visits to Italy where his mother in law lived, and, ‘fed up with racing across France by car without having time to see anything’ decided in September 1971 to go by bike – ‘following canal banks and other pleasant vegetable routes.’ He allowed himself 10 days for the 1250km ride via Newhaven-Dieppe.  So far, so familiar.

Instead of buying a bicycle from a shop in the normal way, Newby seized the excuse to have one made ‘in the Midlands’, ordering a machine that would be fast and comfortable over long distances and easily serviced in France and Italy without needing parts from England.  Not too difficult, one would have thought.

The resulting bicycle, made partly in feet and inches, part metric, was signally unfit for purpose.  Its panniers were difficult to detach and it weighed 60lbs when laden with camping and cooking kit, guide books, maps and a heavy bag of specialist tools none of which would prove helpful when the rear tyre developed ‘a mysterious distortion’ two hours out of Wimbledon.

Newby pressed on for France where he was told that his ‘enveloppe,’ whatever that is, was ‘ineradicably flawed’ and that he would not be able to replace it in France.   Although he dwells at length on cranks, brackets, gearing length and other technical aspects of bicycle construction, Newby is no more able to explain this defect than he was to rectify it.  He has told us that the hubs were French, the wheel rims Swiss and the tyres Belgian, but somehow what he needs is ‘une enveloppe anglaise’.

In search of this elusive item Newby wobbled on to the ‘Michelin depot’ in Rouen and from there was sent to the Michelin factory in Clermont-Ferrand, 550km away by main road in the ‘thousands of feet high’ Massif Central.   That put paid to the canal banks and vegetable roads.  Having given away his heavy guide books he gets lost trying and mostly failing to avoid cycling on main roads which he is surprised to find filled with fast-moving lorries; a problem that might perhaps have been solved by the simple expedient of buying a new map.  At the end of a 168km day he joins a group of cheerful naked routiers for an all-over wash in a garden trough at the Hotel de la Gare in St-Beauzire.  Forgive my scepticism, but this all sounds terribly implausible, or at least unnecessary.  This is 1971 – not exactly pre-history.

Newby describes France as ‘a country arguably the most beautiful in its infinite variety in Europe’ and remarks on how much nicer to cyclists French hoteliers are than their UK counterparts.   Even so, he finds it hard to be friendly with them and has trouble with their language, although like many writers he is unable to resist throwing in French words like auberge and usine for added couleur.  Considering Newby was travel editor of The Observer at the time of the ride, I was surprised, to say the least, by his slapdash approach to fact-checking/proof reading/editing.  There is of course no reason why he should be a French scholar, but Gill Gibbins and Robin Baird-Smith of Collins, whom he thanks for their advice and help, along with Ann Etherington for her accurate and unbelievably rapid typing, could surely have done better.

Here are a few mistakes (from a chapter of only 14 pages): bon chance, fôret, réfuge, tristesse ouvrier, rilettes, priorités à droits, chemins departementals, chemins vicinal, bière au pression.  Newby admires ‘the Dome valley’ on the way to Gap, credits France with the creation of Tintin and Milou, and repeatedly describes the climb to the Col de Vars as ‘steeper than 9 degrees’, which it is not.  (A 9 degree gradient is about 15 per cent, and according to my research the maximum gradient is 8.7%).

Although its usine came to his rescue in the end, Newby dislikes Michelin, not only for its location in the thousands of feet high Massif Central, but perhaps because he is an adventurer not a follower and instinctively suspicious of guide books that make it easier for chefs and hoteliers to raise their prices.  This is fair enough, but to say that ‘the French are still capable of writing in Michelin in terms of self congratulation of their best restaurants as no other people in the world would dare…’ seems misguided, considering the red Michelin guide at the time contained no descriptions at all, merely symbol-ratings and the names of a few speciality dishes.  Gault Millau magazine and guide – possibly inspired by the wordy British Good Food Guide – might have been a better target, but Newby’s French may not have been up to that.

And anyway, aren’t all nations in the business of self-congratulation of their best restaurants in the most glowing terms they can manage?  It’s called tourism marketing.

Before tackling the climb to the Col de Vars, Newby enjoyed a ‘very late lunch at a restaurant next door to the station at La Durance.’   But La Durance is a river, not a village, town or station.  The travelling writer records the exact price – amazingly low, in most cases – of every meal and hotel bill and converts it assiduously into pounds and dollars, but invites us to believe he stayed in the ‘Hotel du Châteauneuf-sur-Loire,’ which sounds a most unlikely hotel name.  My interpretation of some of these puzzles is that Newby was writing from old notes, had difficulty making sense of them in places, and did not feel the need to travel far down the verification route.  La Durance, for example, may have been the name of the restaurant, not the station – Mont Dauphin at a guess.

‘From Wimbledon to Italy mostly by bicycle’ might have been a better title for the chapter.  From Clermont-Ferrand Newby travelled by train to Valence and Gap before riding over the Alps to Italy.  Linguistically he is on much surer ground when he gets there.

PS Interested to read The Guardian’s obit from 2006.  ‘…… in truth, he was not a very good travel editor. The nuts and bolts of the job bored him, and the vulgarity of most modern travel journalism disgusted him. His talents were wasted on the minutiae that were required.’    That is one way of describing the need for accuracy.