Long after I gave up eating and sightseeing my way around France, researching guide books for Which? and the AA, it took a chance invitation to cycle home from Switzerland with a friend to reintroduce me to the pleasures of exploring the back roads of France; and to introduce me to the bicycle as the best tool for the job.

I had a bicycle already but did not consider myself a cyclist.  I had never done a long ride and had no idea if I would enjoy one or be able to do it.  I found I did, and could.   I wrote an article about the trip, and positive feedback plus the desire to do more rides gave me the idea for the book.

Cycling for pleasure is the idea.  A bike ride does not require extreme fitness, special clothing or any gadgetry more technical than a bicycle.  It does not have to be a race, an endurance test or a charity fund-raiser.  Rolling along at ten miles an hour is no more and no less than a great way to enjoy rural France.

The rides described in the book, and illustrated here with detailed maps and a few holiday snaps, are 400 to 550 miles long, and the longer ones took us a long week – two weekends and a week, typically, including a day’s travel at each end of the ride.  Many cyclists would cover a much greater distance in that time. Others would prefer to take it more slowly and do the ride in a fortnight.  That sounds an extremely sensible approach.

May the road rise up to meet you, and the wind be at your back.

“… an ideal gift for cyclists and francophiles” (Real Travel magazine) 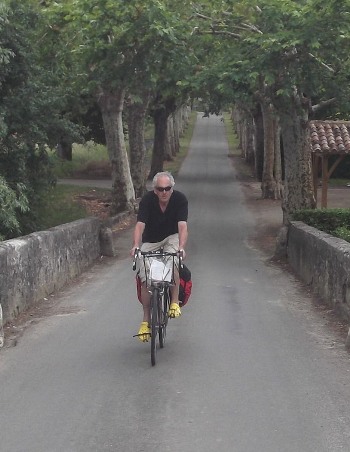 France on Two Wheels, by Adam Ruck, is published by Short Books @ £8.99