Guédelon gave us our sightseeing surprise of the week: a medieval castle under construction in the middle of nowhere, using only medieval materials and methods, and scheduled for completion in 2023, unless they introduce the 35 hour week before the end of the 13th century. 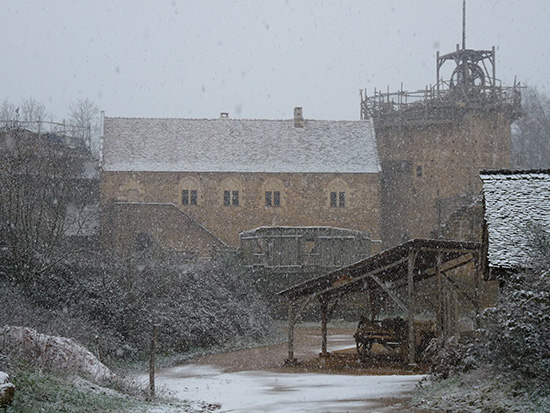 Medieval builders evidently liked a well appointed picnic area, and we gratefully borrowed their bench and table for our lunch before embarking on the site tour.  This revealed stone cutters and rope makers busy at their work stations, a man inside a treadwheel hoisting building blocks, and a splendid menagerie of pot-bellied pigs and other denizens of the medieval basse cour.

“A feeling of immediate contact with the past is a sensation as deep as the purest enjoyment of art,” wrote the communist historian J Huizinga; “an almost ecstatic sensation of no longer being myself.”   My history master called it the oo-er approach to history. 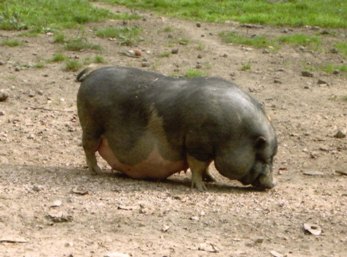 Guédelon is not a film set, a restoration project or a theme park.  It has been described as “archaeology in reverse” – learning about the past not by digging it up, but by building it and confronting the problems encountered by the original builders.  Historians and archaeologists report that the exercise has given much new insight.

Puisaye was border country between France and Burgundy, and Guédelon has been conceived, very specifically, as a small-scale second-division residential castle, notionally ‘set’ in 1228, during a period of peace between crusades, with the ravages of the Black Death and the Hundred Years War still some way off.

The place was chosen because most of the required materials were available locally – oak, stone, clay, sand and water. Many of the tools are made on site: mortar, ropes, nails, saws, roof tiles, lifting-engines.

The 50-odd labourers work in medieval clothes and the ‘tavern’ serves medieval dishes.  Of course there are compromises. Hard hats may be worn, and you may catch a worker sneaking off for a smoke. Anachronistic scaffolding is erected, to satisfy the demands of health and safety.

The rear defensive wall and two towers are almost complete, as are the great hall and VIP guest room.  The roof of the living quarters is almost finished: the first rib-vaulted roof made using medieval techniques for 600 years.

At least as fascinating as the fort is the surrounding village, with a forge, rope maker, carpenter, stone masons, and a weaver. Masonry is lifted to the battlements by rope pulleys driven by a worker in a wooden treadmill or ‘squirrel cage’ of the sort people give their hamsters for exercise.

In a few years Guédelon will be a fully-fledged repro castle with a moat and battlements.  What will be the point of it then?  Perhaps they should re-enact a siege and work out how to demolish it in the most authentic way.

Guédelon is closed on Wednesdays, except in July and August.

France on Two Wheels, by Adam Ruck, is published by Short Books @ £8.99