Like many other self-regarding cyclists, I noted the arrival of the battery power assisted e-bike with a mild and detached interest similar to that with which my children and many others view golf.  Nice idea, but it’s not really for me, is it?   The e-bike is something to put behind an ear for later, to help one through infirmity.

Meanwhile, isn’t self-propulsion at the heart of the pleasure of cycling?  Where would be the satisfaction in making it to the top of the hill on an e-bike?

Then came the day when I found myself in the Austrian mountain village of Grossarl, near Salzburg, faced with an hour of leisure in its beautiful hotel the Grossarlerhof and an agonising choice: to spend the hour in the spa or take one of the hotel’s e-bikes out for a spin?  I have never been the most devoted fan of treatments, which make me feel too much like a patient, so I opted for the bike ride.

My host pulled one off the rack, gave the tyres a kick and took about 30 seconds to explain the workings, which are uncomplicated even to the technologically and mechanically illiterate.   As well as the usual gears, there is a separate lever to control four ratios of power assistance, from 0 to 3, and a gauge to tell you how much battery life you have left.  The more power you call on, the quicker you use up the battery, obviously.   And no, it doesn’t recharge when you are freewheeling downhill or pedalling along the flat unassisted.

“Go through the village and take the first lane on the left after the bridge,” he said.  “That will take you up the mountain, as far as you want.”

Depending on whether you are used to riding a mountain bike or a road machine of featherlight sensitivity, the e-bike will feel a little or extremely heavy and cumbersome.  To me it seemed perfectly comfortable and pleasant to ride along the flat without power assistance.

I found the first lane on the left after the bridge and soon realised (puff) that I was getting plenty of exercise and building up a good heart rate.  This was no different from pedalling up a steep hill on any other bike, except that I was going faster than usual: about 10 miles an hour instead of 5.  Hairpins came and went, I passed guesthouses and farms and soon left the village behind. The road surface changed from metalled to a rough track. In no time I was out in the wilds with the cows and the gentians, looking down on the valley from a great height. My rough track zig-zagged across winter ski pistes and if only I could have taken the bike out for a bit longer I could have carried on up and over the mountain to hurtle down to Dorfgastein on the other side.  But at some lofty point I had to turn around. This sign may give someone the information they need to tell me how far I got. 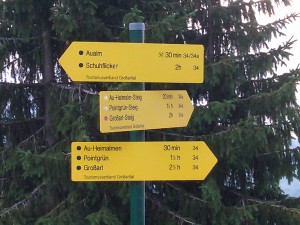 The long ride back down to Grossarl did not seem to present undue difficulty, although I have heard it said that one of the great disadvantages of the e-bike is that people crash and fall off when riding downhill, because of the machine’s lack of balance (or something). All I can say is, I didn’t.

A month or so later I embarked on a short bike trip in Lithuania where the terrain is basically flat and we were not aiming to achieve a high mileage.   When the organiser offered e-bikes, I had to suppress a laugh.  How could anyone want an e-bike, for the sort of cycling we were going to do?

But two or three members of the group did take the e-bike option, and were delighted with the surge of power that kicked in when they engaged the battery to call on its power.  The more and less sporty cyclists pedalled along at much the same speed in a well-balanced group, as well might not have been the case, without the equalising factor of the e-bike.

Have I been wrong about the e-bike, or is it simply that I have reached the age for it?