Reading one’s own words is a strange experience, especially when someone else has written them.  I got used to it when a resort guide book of mine enjoyed pride of place on the bookshelves of other skiing journalists.

A ‘borrowing’ may be no more than a meeting of minds, and I decided this was the most likely explanation when I found a joke of mine in a guide book to winter sports I picked up last week in my local second hand bookshop.  The author of its skiing section is one Antony Knebworth – Viscount Knebworth, no less.   The joke I recognised was a definition of the nursery slope: ‘icy and overcrowded part of the mountain designed to put people off skiing,’ or words to that effect.  I was delighted with this when I came up with it in about 1985.

The strange thing was, Knebworth wrote his book in 1930.  Could I have read and absorbed it long ago, for unknowing later recall?  I don’t see how.  I did not grow up in a skiing family.  There were no dusty old ski books in our attic.

I prefer to think that Knebworth and I independently made the same observation about nursery slopes – which is after all not so frighteningly original – and by a similar process whittled it into similar words.  I can imagine him informing his wobbly friends – Cyril Connolly was one – that he was not going to see them lose their nerve on the hard ice of the hateful nursery slope.  Rather than suffer the indignity and pain of their first falls in front of a mocking gallery,  he would take them to a secluded and empty place higher up the mountain, where the snow is soft and they could discover for themselves the exhilaration of being up among the summits.  I have tried the same tactic on my friends.  They rarely appreciate it.

I have since read up on Knebworth, an irrepressible prankster who died in a plane crash at the age of 30 having already given up stockbroking, become a conservative MP and dressed up in a skirt and scarf to enter a ladies ski race in Murren under the name Martha Mainwaring, giving rise to the place known as Martha’s Meadow.  Appearing at one of Murren’s fancy dress balls as a baggy-trousered statue, he was persuaded to pose on a snowy plinth outside, where he was debagged.  (That story is plagiarised from a book called Ski Joy by H Stone, by the way).

Mixing up all the shoes left outside bedroom doors for polishing was another of Knebworth’s jolly japes in Murren, and he was doubtless one of the prime movers of a favourite apres-ski entertainment at the Alpina: tearing up pillows and scattering their contents for simulated powder skiing on the staircase.  Debagging seems a lenient reprisal, considering there was a perfectly good 500 metre cliff he could have been thrown off.

As a skier Knebworth was completely out of my league.   All histories of the Inferno race, which was introduced in 1928, cite him as one of the five ‘ski crazy’ founders of the event, but – to his intense regret, no doubt – he was not present to compete in the inaugural race.  In January 1924 he had won the Kandahar at Murren and came second and third in the combined slalom and ‘cross-country championship’ (or, as we would say, downhill) races at the British Championship in Adelboden.

Returning to Oxford he found it impossible to settle; a problem that takes me back to January 1972 when my undergraduate rooms in Edward Heath’s Britain seemed a dreary place after a month of gracious living in a friend’s chateau near Gstaad.

“If I’m here for a purpose,” Knebworth wrote to his father, “what the hell is it, and how do I set about it?  But if not, then why, when the only thing that I want to be doing is skiing, am I sitting in my room at Oxford writing to you?   By being at Oxford when I might be in Switzerland, am I fulfilling the job which God has given me to do?……. What I really feel is that, if on a pair of skis in Switzerland I forgot everything except the joy of living, and the moment I get back here I sit down and write a long morbid letter on the object of life, Well, why is God’s name not stay on skis?”

….. forgetting everything except the joy of living

Does this sound insufferably spoilt?  Perhaps a little.  But for those of us with sons and daughters approaching Knebworth’s age and similarly passionate about skiing, and those of us who set ourselves up as ‘ski writers’, it is no harm to be reminded of the intensity of a skiing passion.   As Knebworth and many since have found, this can be quite awkward – for the purposes of study, career, marriage etc.   The fact that he was not in Murren for the first Inferno suggests that Knebworth managed to put skiing in perspective, but only by substituting an addictive passion for flying.  Indulging the ski habit might have been the better course.

Alpine skiing was still making its way in the sporting world of 1930, and Knebworth’s contribution to the winter sports book has a polemic tone, as was the style of the day.  It is forthright, readable, and surprisingly wide ranging, with an absurdist tendency that he struggles to control.   (“Pig-sticking may be said most perfectly to combine the truest form of sport with a good taste of competitive spirit.”)

The book – Vol V111 of the Lonsdale Library Series on Sports, Games and Pastimes – has a serious educational mission.   “Its aim is to help and instruct,” writes the Earl of Lonsdale, “with authoritative advice on gear and in practice.”

Here is Knebworth’s authoritative advice on ski gear for women: “Go to any shop you fancy, choose the latest design in ski-ing suits. Buy it, wear it, rejoice in it, throw it away and next year repeat the process.”  And for men?  “Seek out your favourite and oldest clothes, which you are not allowed to wear at home, and take them with you.  Wear them, rejoice in them, bring them home and next year repeat the process.”

He writes best, wonderfully well in fact, about ski racing, and distinguishes between racers who descend in a controlled and stylish manner, and those who hurtle downhill ‘all out, gloriously out of control’ and trusting in ‘hopeful determination’ to bring them home in one piece.  The early skiing scene was riven with controversy, and this one was hotly debated in the hotel drawing rooms of Switzerland.  Knebworth gives serious consideration – at least, I think he is being serious – to the strategic question. Which is quicker: skiing a steep slope safely with a couple of turns, or taking it straight, crashing at the bottom, picking yourself up and carrying on?  Knebworth recommends the straight line – as the Kandahar Club motto states ‘Sicut Sagitta a Sagittante’.

“The essence of good ski-ing is abandon” is the first sentence of his How to Ski chapter.   For the Knebworths of this world, abandon was of the essence; it was the early British style, and of course it was the roaring style of the 1920s.  The front cover and many of the photos illustrating the skiing section of the book show Christopher Mackintosh, high priest of crash-and-burn school, in glorious action.  Franz Klammer was a more recent adherent.  Reluctantly the author concedes that abandon is not the secret of success in the Slalom. 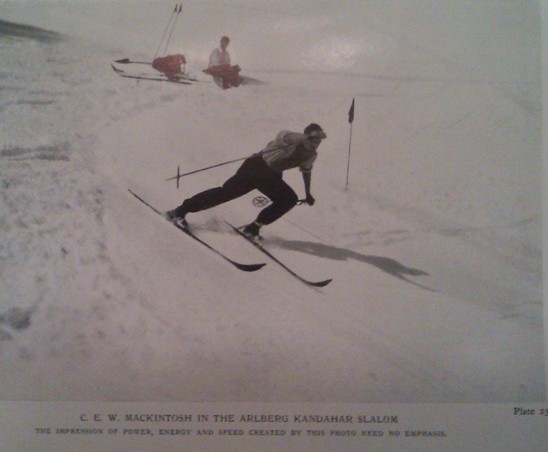 On training, Knebworth writes with tongue firmly in cheek; one doubts that he did much of it.  The key skiing muscle, he writes, runs down the front of the leg and is constantly in use for pressing down with the heel and pulling up the toe to maintain longitudinal balance. In order to train the shin, ‘Try to touch your left knee with your left toe.’  This might be useful today if you were training for downhill racing on langlauf skis; otherwise not.  The fixed heel binding has taken the shin muscle out of play.

Knebworth has fun devising creative ski fitness routines, as I have done in the past.  “Choose a time when the tube stations are comparatively empty,” he writes, “and go up the downwards moving staircase and down the upwards staircase about half a dozen or a hundred times.”  I think he would have approved of an exercise I once offered my readers: springing from side to side over your sleeping dog without spilling your drink.

Hopping upstairs is another old favourite, with or without gin and tonic. I used to be quite good at this but, coming back to it after a gap of two decades, find myself depressingly no longer able.  Sitting against the wall without a chair is a way to make use of time spent waiting for the tube, and less disruptive than the ‘wrong escalator’ ploy.  Reading the newspaper is not compulsory, but conceals what others may consider eccentric or show off behaviour and helps pass the time.

“Give up smoking and alcohol of all sorts at the beginning of November,” advises Knebworth, “and take the maximum amount of every conceivable form of exercise until the time for departure. Rugger, swimming, riding and above all hill walking. But is life long enough?”  Alas, Knebworth’s wasn’t.

Read excerpts from the letters of Antony Lytton on: